Human is the fourth studio album by Death, released on October 22, 1991. The record began an evolution for the band, shifting towards more prog elements with much more complex instrumentation. Lyrically, it focuses on more reflective matters and even has a sort of cosmic atmosphere to it. The lineup consists of the late Sean Reinert on drums and Paul Masvidal on guitar, both of the band Cynic, Steve Di Giorgio on bass, and of course the late Chuck Schuldiner on guitar, vocals and production. Along with Chuck, Scott Burns was a large contributor to the production of Human, a man very crucial to the emerging Floridian Death Metal scene in its entirety.

The album itself is also considered widely influential, and it is one of my favourites by Death. I really love the newly incorporated prog metal undertones and Chuck is beyond talented when it comes to lyricism and guitar playing. When listening to this record – or any Death record for that matter – you can just tell that he loved and appreciated music to such a great extent. Continue reading for a further breakdown of each track and some footage of the band. You know the drill...

The album begins with Flattening of Emotions, a track that begins with a bit of quiet yet intricate drumming, which then crescendos into a rather explosive remainder of a song. The lyrics surround the duality and barrier within humans' perception of themselves. The type of person one believes themselves to be and the one they truly are. Essentially, our idea of who we are and how our life is progressing is based upon the outlook of those around us, and our general environment. The true reality of someone's life tends to reveal itself to them in an explicit form when they experience something catastrophic. The song mentions something interrupting a seemingly perfect life, an 'uninvited stranger'. In this case it could possibly be referencing depression.

One of my favourite songs by Death and within this genre as a whole. You can hear the bass very well which is always nice, and I'm drawn to the concept at hand which is assisted suicide. It also depicts a unique feeling of loneliness. There's a lyric in here about 'manipulating destiny' and how euthanasia is such a complex issue for many different reasons. Chuck mentions the fact that while human beings are alive, those in power have no care, but they are front and center when it is time to carry out the topic matter. There is also a section that conveys how easy it is for some to write off euthanasia as something unethical as opposed to those who are at a point in life where that is what they desire to ease their suffering. Overall, the song is just fantastic both lyrically and instrumentally. The talent here is immense, especially those drums. Sean Reinert was a force to be reckoned with for sure.

Another favourite of mine, I used to believe Together as One was about some sort of romantic element but the actual theme makes so much more sense after truly reading the lyrics. This track actually revolves around the concept of siamese twins – or conjoined twins as they are more widely known – specifically them being ostracized by society for being different. Everyone views them as some sort of abomination. The song talks about how they experience everything as one whole, their own individual thoughts essentially being the only sense of true privacy either of them receive. I really enjoy the speed of the instruments here and the interchanging velocity of the guitars. They range from very quick and sharp to a more dragged out sort of sound.

This song reminds me of the Japanese proverb where all people have three different faces; the first is the one which you show to strangers, the second is what loved ones see and the third is your most inner one, a reflection of who you truly are that you never actually reveal to anyone. Secret Face is a hard-hitting track that depicts a concept almost identical to this proverb. The entire theme here is that one's intentions are not always what they seem to be, disguised by a facade to either gain what they want or some other hidden agenda. These sorts of people are everywhere throughout life. There is a guitar solo near the middle that is simply gorgeous, and the track in general has some of the most intense instrumentation on Human in my opinion. Every complex riff and note fits together perfectly.

I believe this is the most well-known song off of this record, but I can certainly see why it is so beloved as it's also one of my personal favourites. I think I've said that for so many tracks but the album is just so great that I can't choose a singular one. The rhythm on this song is addicting and once again the guitars are fucking gorgeous, especially paired with the heavy bass, urgent vocals and the quick style of the drumming here. The lyrics contain themes of misunderstanding which leads to resentment. In an interview when asked about the meaning behind it, Chuck stated, "it was inspired by the whole Judas Priest scandal, when the band were accused of inciting a fan to commit suicide. It is ridiculous to suggest that music is responsible for parents' fuckups." This is in reference to two teens who committed suicide and the parents placed the blame on a song by the heavy metal band. Ozzy Osbourne has had a similar situation occur, and a few other rock/metal groups, which really does show the stupidity of human beings.

Another track where the instrumentals are simply stunning. The lyrics surround blindness and how when one is without eyesight, the rest of their senses are much more heightened. Additionally, Chuck sings about how, through dreams, the thoughts and experiences of the blind individual are manifested, essentially allowing him to utilize this other way of seeing without eyesight. The song also seems to be referring to the fact that those who can see usually take this sense for granted and do not ponder about how it would be to live without this ability. It is a very heavy song with memorable rhythms and another fantastic guitar solo.

Cosmic Sea is an intensely beautiful instrumental track which reminds me of a certain painting by Zdzislaw Beksinski, the one that is currently displayed in the background of my homepage. The song has a very multidimensional feel to it, mirroring the experience of either floating through space or through, well, a cosmic sea. I associate it with a night sky that is full of burning stars. Every musician in this band was absolutely godlike at what they did, and this showcases it impeccably.

The record closes with another spacey track, this time about extraterrestrial lifeforms that are attempting to undo the damage they've done to their planet. A comparison is made with this situation to Earth, where humans are doing the opposite and furthering the corrosion by their own hands. The lyrics also contemplate the idea that there are other planets in the universe that have fallen to the same fate of corruption and damage. Insane riffs bring this song to power, specifically the ones you hear near the middle right before the heavy ass solo. It appears I can say such words about all the tracks on this album. They are all flawless (PS. If you play Ashes in Your Mouth by Megadeth directly after this track with a bit of crossfade, it has a cool kind of transition sound to it. I don't know, just something I accidentally ran into).

Some facts about Human

- On the Japanese version of the album, there is a bonus track titled God of Thunder which is a cover of the original song by Kiss. This was later included in the 2011 reissue of the record.

- Despite the insanely mature musicianship demonstrated on Human, Paul Masvidal and Sean Reinert were both only 20 years old at the time.

- While it is evident that the band changed up their musical style, they also altered the logo from previous releases. This record sees no drops of blood on the letter "D" like beforehand. The album art itself was done by Florida-based artist René Miville.

- Aside from being massively influential, this record is Death's best-selling album. Its accolades include selling 100,000 copies in the United States by 1995, ranking #82 in the 2006 issue of Guitar World Magazine's list of greatest 100 guitar albums of all time, and 600,000 copies sold worldwide as of 2008.


*Since images from this era are a bitch to find, I've instead linked some video content from 1991. Enjoy.* 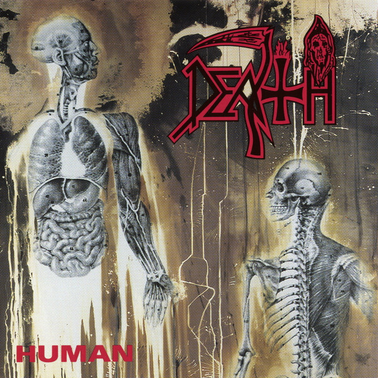 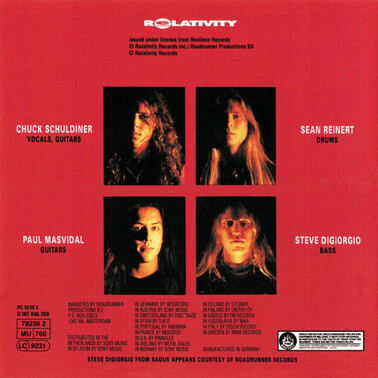 'Lack Of Comprehension' (Remixed) + 'The Making of'